Ready to Hire a Coach? 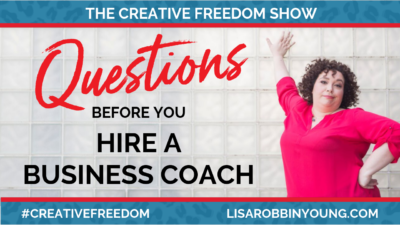 Think you're ready to hire a business coach? Jessica did! She asked what kinds of questions she should ask during a hiring interview. Not so fast! Before you plunk down your hard-earned cash, make sure you know what you're getting - and that you're ready to make the investment!

Once upon a time, I ran ten miles and no one was chasing me. It was a bucket list thing, to run the Bobby Crim 10-mile road race in my hometown. So I suited up and, in a matter of just over 2.5 hours, managed to lose about 4 pounds. Ha. I also learned a […]

If you're like most creative entrepreneurs, you started your career wearing all the hats. Along with that came a sense of responsibility for all the parts and pieces of your growing enterprise. That's logical. After all, if the business isn't making money, you're not making money, and that's a problem! But a bigger problem I've […]

Is Content REALLY King? Back in 1996, Bill Gates wrote an essay for Microsoft insiders stating that Content was King – meaning that as the internet advances, it will be imperative to deliver timely, useful content in whatever form the platform demands. It was a statement so general that it easily became a meme for […]

After a LONG hiatus (longer than I wanted, truth be told, but whatever.), Creative Freedom is BACK! Sound the trumpets, yo. This is a BIG deal for me. As you'll see in today's episode, we've made some changes. Why? Because I have been changing. My life looks radically different than it did a couple of […]