I can't tell you the number of times I've seen "make six figures" come up on someone's annual goals. When I was a young entrepreneur, it was one of my goals more often than I care to admit. It felt like something I should be doing. Shouldn't every creative entrepreneur have a six figure business? Isn't that the goal? To make more money, have more fun, and enjoy life in the process?

Well, yes and no.

"Make Six Figures" is too vague.

That statement is at once sexy, intimidating, and unclear. There's a level of prestige that comes along with saying you're a six-figure entrepreneur. But what are you really saying? Is that six figures in income or profit? What does "six figures" really mean? Not just in the literal sense, but in the emotional sense? When you start to dig into those definitions, that's when you hit pay dirt.

Do you just want to hit the target? To watch the numbers roll from 99,999 to 100,000? Then say that. Be specific. And remember to think about the parameters that go along with that success. Do you want to hit that target, no matter what? Or, are there certain sacrifices you're not willing to make? Again, be specific. In 2018, one of my goals was to increase my leveraged income as a percentage of sales. I could have hit that goal by doing less coaching and reducing my income to only leveraged offerings. But I wanted to maintain or increase my current income while increasing the amount of leveraged income that was coming in.

There are lots of ways to hit goals. How you get there matters.

One colleague of mine is committed to spending 2019 travelling with her son. It's his gap year between high school and college, and who knows when they'll have an opportunity to connect like this once he's older? She's turning down opportunities that could help her make a lot of money fast, because it would mean giving up on her dream of spending this year with her kid. Instead, she's doubling down on her business and working a lot of hours now so that she can bank that money for travel later, once her son graduates.

Do you want to grow your 100k to the mid-six range? Are you aiming to break seven figures and have a healthy six figures in profit? What's the point of all that revenue? Sometimes more (or bigger) isn't better. Take a look at Denise Duffield Thomas' numbers for 2018. Revenue was down, but profit was way up (nearly double). Growth for the sake of growing often leaves you feeling burnt out, fatigued, and stressed (especially if you're a Chaotic creative, like I suspect Denise is). Being strategic about your growth plans helps you be clear about why that six-figure number is so important in the first place.

Financial goals, by themselves, rarely mean much. There's usually something deeper that's connected to that financial goal, which is why I teach my clients to find and aim for their Enoughness Number.

What is your Enoughness Number? 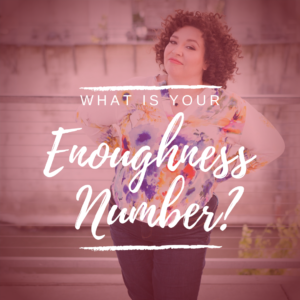 I walk through how to find your Enoughness Number in my book, Creative Freedom: How to own your dreams without selling your soul. Basically, you calculate the annual amount of money you'd need to live your ideal life and add a bit for wiggle room. That's your Enoughness Number. It's literally enough for you to live - to thrive, not just survive. For most creative entrepreneurs, that doesn't need to be a six-figure number. If it is, then great, but if not, there's no need to overshoot what's really important to you just to have bigger numbers. That's just vanity and ego yanking your chain.

Now, if your Enoughness Number is a six-figure number, then it might be a useful goal. But, if it's not a DUMB goal, it still might not work. Remember, DUMB goals are:

If you have any doubt about that six-figure goal, you need an Interim Enoughness Number. A number between where you are now and your Enoughness Number that feels DUMB to you. Keep playing with the number until it feels right. It should be a stretch, but not so much of a stretch that it feels impossibly hard.

So, for example, if your Enoughness Number is $131,245, and your annual income right now is $32, 621, it might feel pretty hard to more than quadruple your income in a year. So maybe you aim for $68,000 as your Interim Enoughness Number. It's not where you really WANT to be, it's better than where you currently are, and it still feels like a stretch without feeling impossible to accomplish. There is no rule that says you can't make more money, and a DUMB goal can catalyze you to move ahead on your goals. Remember what I've said before: your goal isn't always THE goal.

You need to be personally invested in the goal.

When I take my clients through my Dreamblazing process, it is common for us to find that most, if not all their goals are actually personal goals, rather than business goals. That's because creative entrepreneurs need to set goals differently than a large business or organization. We set personal goals and then use our business as a vehicle to help us achieve what really matters in our personal lives.

For example, one client had a goal to improve his health issues, and a desire to spend more time with his family. These goals are less about the business and more about his personal needs. In order to achieve those goals, however, he needed to create some milestones that were directly connected to the business. He needed to:

That shift in thinking allowed him to research and launch a new product line that leveraged his time and reduced his overhead while potentially increasing his income! He's on track to have a 1 or 2-day work week because he's focused on what he really wants and is using the business as a vehicle to get there.

So whether or not you choose to make six or seven figures this year in your business, be specific about what really matters to you. Make it clear. Make it personal. Make it D.U.M.B. By defining success more clearly, you'll have a much easier time achieving it.

There's help available if you need it

Accountability Club has welcomed a few new members this month and we'd love to welcome you, too! We're a tight-knit group of creative entrepreneurs that support one another and help each other reach our goals and dreams. If you'd like our help holding you accountable to what really matters to you, consider joining us during open enrollment!

Confession time: I have sort of a business crush on Mr. Franklin. I stumbled across his first book, Produced by Faith, just as I was finishing work on my own book, The Secret Watch. His collaborator, Tim Vandehey was a friend of my editor, and I was actually checking out Tim's work when I came […]

It's report card time around here. My youngest is struggling in gym class. Sadly, I've seen it before with his older brother. "Won't even attempt new activities," the report card reads. So hubby and I sat down with our 8 year old to find out what's going on. "I can't do it." He said. "I'm not […]