If you're like most creative entrepreneurs, you started your career wearing all the hats. Along with that came a sense of responsibility for all the parts and pieces of your growing enterprise. That's logical. After all, if the business isn't making money, you're not making money, and that's a problem!

But a bigger problem I've found in my years of working with creatives across the spectrum, is that as the business grows, you're still trying to do too much. You're trying to hold yourself accountable to things that are just too hard to handle on your own.

There's a time and a place for self-accountability. There's also a time to know when to let go and get help. (Tweet this)

Creatives want to be independent. Chaotics see themselves as free-thinkers and free spirits. Fusions almost always have a better way to do something, and Linears don't want to be hampered by too many cooks in the kitchen. Holding yourself accountable is efficient and effective.

Simply put, you can't manage it all, and you shouldn't try to do it for long. Humans just aren't wired that way. Okay, maybe SOME humans are, but they are the exception, not the rule, and even they need help from someone else at some point.

So why do we hold out so long when it comes to self-accountability?

According to Mark Samuel & Sophie Chiche, authors of the book "The Power of Personal Accountability", there are three fears that come into play when you try to hold yourself accountable for everything.

When I was a kid, it was my job to dust the living room. I hated dusting. We had a coffee table that frequently had rings because people wouldn't use a coaster. It was tough to keep clean. There were several instances where I got in trouble because someone else came along and left a ring after I had cleaned, but before Mom had inspected. No matter how spotless the rest of the room was, she would often point out how I "missed a spot" on the coffee table.

According to Mark & Sophie, "We associate accountability with blame. We fear that if we're accountable for something, we'll be the one to get blamed if it goes wrong."

Sometimes, we do get blamed - like with that infernal coffee table. But more times than not, we don't. And, as I learned with the coffee table, sometimes there are smarter ways to do things. One of my siblings finally suggested I do the coffee table last - just before Mom got home. That way, she'd see me working on it, and nobody would have time to put anything on it before she inspected.

It was a simple solution that I couldn't see for myself. I just wanted to be DONE with it, so I could check it off the list. I was afraid that I wouldn't get it done if I waited, and I let fear drive the bus.  I've talked before about unconscious self-sabotage, driven by fear. We get triggered by feelings of inadequacy and decide to do nothing instead. It takes that outside eye to help us see things differently. 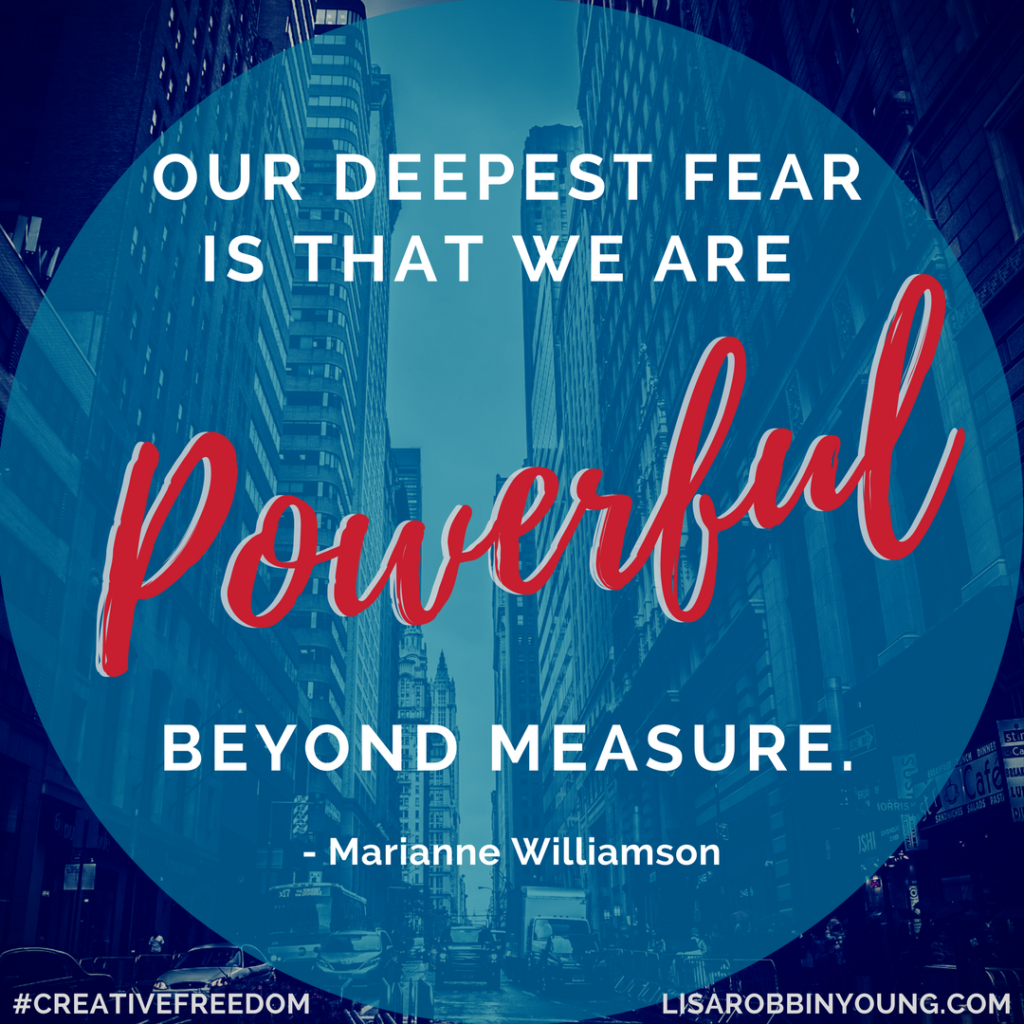 I have a friend who really struggles with this one. Simple requests get rejected, for fear of letting someone down. I remember asking him if he would remind me to do something later in the day - something we both needed complete. He said "I'll try to remember". He never texted, and the thing didn't get done. When I asked why he didn't text me, he said "I never promised I would."

This was a recurring theme in our friendship. When I finally confronted him about it, he confessed that he didn't want to make a promise he wasn't absolutely sure he could keep, because he'd feel like a failure if he let me down and didn't follow through.

I told him, "It's a text message, not a kidney transplant!"

This fear of failure stems from not wanting to feel incompetent or look bad in the eyes of others. "To avoid feeling that way," the authors state, "we play it small. We stay in what is familiar. We don't challenge ourselves with bigger choices, so we don't have to ever feel inadequate."

We worked together to "game the system" in his brain. We looked for what Teresa Ambile calls a "small win", and re-trained his brain to focus there. I reminded him that "trying to remember" was also a commitment. That he couldn't just blow it off without even trying to remember to text me... that he would be lying to me. Integrity is a HUGE deal to him, and he recognized how he's be letting us both down (double trouble!). It was a small change in his thinking, but it opened his eyes to a new way of honoring the commitments he was making and gave him a chance to build his confidence with small wins first.

Taking risks can lead to mistakes, or even (GASP!) failure in the short term. But is also leads to learning. Learning means we might not get it right the first time. But knowing you've got a safe space to take those risks takes the edge off a bit. It's hard to create that safe space by yourself. Instead, you stay stuck in the echo chamber in your mind.

To some, this may sound like a cop out. I know it did for me the first time I said it. All kinds of worthiness issues cropped up that kept me from moving forward on things I knew were important to me. I had to ask for help... sometimes from people I barely knew! That's hard, but certainly not any harder than staying stuck. Our authors give us more insights:

"If we increase accountability, we will accomplish more, and we know it. We will gain more responsibility. We will be expected to achieve at a higher level of performance. We will have to maintain excellence. We will have to deal with people's jealousy and our own guilty feelings for outperforming others. That is a lot of pressure. It is strangely easier to dream of success than to actually achieve it."

So yeah, I can see how that might feel like a cop out to some people (myself included). The reality, though, is that if you're feeling pressure, the last thing you want to do is create more pressure for yourself. You'll do anything to take the pressure off, if you can, which means doing less, or doing nothing, so that you're not feeling that pressure anymore. And there you are, right back at ground zero on those things you said were important to you.

So when holding yourself accountable fails, what can you do?

Get others to help hold you accountable. If you're a technophile, maybe you'll use an app like MyFitnessPal. I struggle with apps because they require me to be attached to my device in order to stay consistent. That's not me. If it's not you either, you might try a more personal approach.

I've had an accountability partner for years now. Winnie has seen me through more ups and downs than all the roller coasters at Cedar Point. We meet once a week and debrief what happened since our last meeting, what we're working on, and where we're needing help. If you don't know who you could turn to, consider a group accountability program, where you've got the "hive mind" and power of the group behind you to celebrate your wins and help you navigate the rough spots.

Fear's not going away any time soon, so anyone who promises to eliminate fear should set off all kinds of red flags. You may not be able to eliminate it, but you can mitigate it. Here are a few ways that external accountability can help.

Eliminate blame - you'll have a safe space to practice. Members of Accountability Club (A-Club) will often ask how to handle a tricky situation before they try to handle it publicly. And if they do have a "facepalm moment" they know they're not alone, and can come to the group to talk it through, be encouraged, and regroup. It's a judgement free zone that safe for everyone to practice.

Focus on progress, not perfection - This takes the sting out of so-called "failure". By dropping the judgement and celebrating what DID get accomplished or what you learned, you've got a chance to make every opportunity into a teachable moment. Are you further along than you were before? That's progress. Celebrate it! By looking for and celebrating the small wins, you're re-programming your brain to train it for success.

Take the pressure off - Take your focus off just the "strike zone" and celebrate the tiny steps along the way. Focus more on the actions you can take and less on what other people might think. Put your attention firmly on the actionable steps on your to-do list that lead to your goal. That way, others lose their power over you. Guilt drops away because you can point to exactly what you did (and how they could do the same thing to get comparable results). 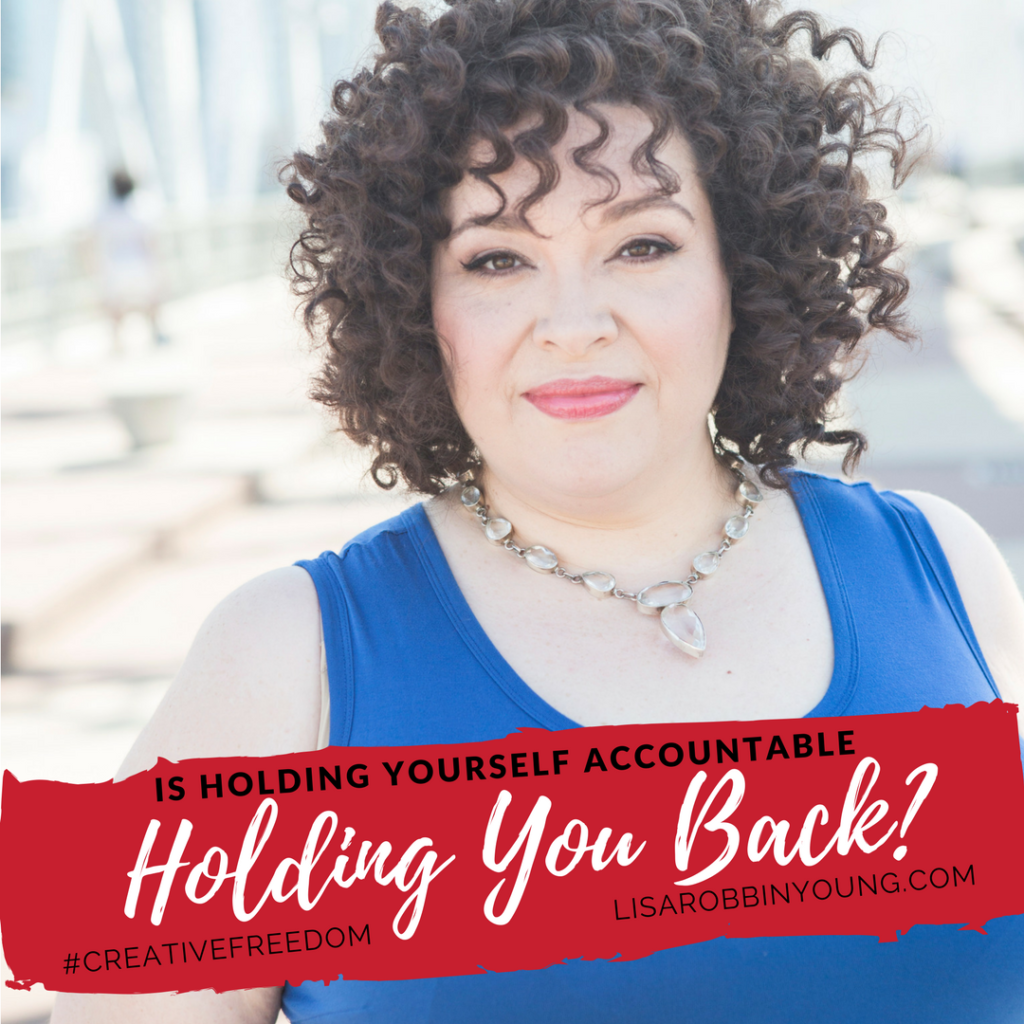 It isn't about you being "magical" or feeling guilty about your hard-won progress. You did the work, dangit! This also keeps you clear on what's really possible for you. If your plate is full of action steps, you simply CAN'T take on more. There's no room! You can start learning new skills - like delegation, and team building.

Can you do these things for yourself? Sure. And sometimes you have to. I've been there. But even as a self-starter that loneliness and isolation can be tough. Not to mention the echo chamber of thoughts that start rattling in your head. That's when trying to hold yourself accountable can start holding you back. You simply can't manage it all by yourself all the time. It's just too hard.

If you're ready to take the pressure off and get the support and accountability you need to move forward, the doors are open to Accountability Club. Enrollment is only open a few times a year, so now's the time to get on board! Not sure if you're ready? Join us for our free monthly training call this weekend. We're talking with Becky Mollenkamp about how to use LinkedIn to grow your audience of Raving Fans. You can listen live at no cost, but the recording is only available to members of A-Club. As long as you're on my mailing list, you'll get an email with all the details.

Has your business fallen down a few notches on the ladder? Try not to worry too much as it happens to the best of us at times. It’s not the worst thing in the world as it can be fixed. It is going to take some times and dedication on your part, but it can […]

Four ounces. It's approximately what the iPhone 5 (and a variety of other every day items) weighs. And since the start of the year, that's my net weight loss for all of 2014. Four ounces. And I'm celebrating! For the past two years, I've logged my daily weight (well, as often as possible), high or […]