MacGyver or Alias? Your brand "character" determines who are your raving fans

It may sound silly to you if I asked “what does your business taste like?” or “if your business were an animal, what would it be?” And yet, these are not uncommon questions to ask in the branding process. While there's not enough time and space to develop your brand in a post like this, here are some things to keep in mind as you develop your customer experience.

Your answers to these (and other) questions can paint a striking picture of your creative brand.

I loved MacGyver (still do!). To me, he was trustworthy, reliable, and he had an unmistakable brand. He never used a gun (except once, in the pilot episode of the show), he ate healthy food, and he had a mullet that every girl seemed to love. I'm pretty sure he was a Fusion Creative. He wore jeans, drove a Jeep, and was never without a roll of duct tape. He used his brain to solve the problems of the world. On the rare occasions he put on a tux, he looked like a fish out of water – he even confessed that he felt like a fish out of water! He preferred his jeans and tennies, his Jeep, and his handy roll of duct tape to the high-falutin airs of some Embassy dinner.

In fact, you might say he was trustworthy and reliable because he had an unmistakable brand. You always knew what to expect from MacGyver.

I had the opposite reaction when I watched Alias. Sydney Bristow was super smart, but hard to trust – even though I knew she was the hero of the show. She was a double agent, always in and out of disguises (most likely a Chaotic creative in the making). She was likable, but it was hard to know who she really was or which side she was on. I loved the show (even after they jumped the shark with that whole Rambaldi subplot), but it took several seasons before I felt like I really knew what to expect from her.

What kind of character are you creating in your business?

Whether you want to admit it or not you are a character. As a creative entrepreneur, you have to craft a persona – and I strongly encourage you to make it as true to life as possible. BRanding professionals will talk in terms of Archetypes. They'll use terms like "hero" or "innocent" or "maverick" but for creative entrepreneurs, this is more about how YOU want to show up on your best days. Young Steve Jobs dressed like a business man (mostly). As Jobs mellowed over the years, he stopped wearing business suits and became known for his iconic black mock turtleneck and jeans. It was a character, to be sure, but one that was true to who he was as a human being. Did his "archetype" change? Who cares? All I know is he became more likeable, more approachable, and that's the image he wanted to portray for Apple (even if he was a megalomaniac behind the scenes).

Lady Gaga insists on being outlandish in her own way – even when she's dressed conservatively, she'll have a thick layer of glitter eye shadow and long, color-coordinated fingernails (like she did at the 2016 Super Bowl). They are the calling cards of her brand experience.

You need to decide now what you want to be known for – before someone else decides for you. There are countless tales of performing artists who are “made” into a persona by their agents and producers. Don't let that happen to you – even if you don't have an agent or a producer. I tell my clients all the time:

You train people how to treat you based on what they've come to expect from you and what you've come to accept from them.

Knowing what you want to be known for isn't just about your Great Work. Sure, it's important to deliver a quality product or service, but who is delivering it (your character) and how it's being delivered is just as important to the story of your business. Tiffany's could use any color box and still command their lofty prices, couldn't they?

Tiffany's gift box has become synonymous with “excellence, exclusivity, and flawless craftsmanship” according to their own website. Founded in 1837, Tiffany & Young, as it was then known, started as a store for “stationery and fancy goods”. Then, in 1845, founder Charles Tiffany (a Linear Creative by all accounts) published the “blue book” - a catalog of their “exquisitely handcrafted jewels” that featured the distinctive blue shade on the cover. It's said that Tiffany selected the color because turquoise jewelry was a popular gift at the time.

Whatever the reason, Tiffany cultivated a marketing story equally attractive when they started using the color on their boxes and gift bags. It was the one thing you couldn't buy in the store. The box would be given gladly to you - free of charge - when you “bought a little something” to put inside it. 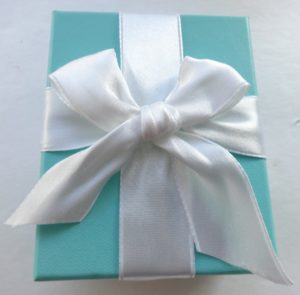 “The rule of the establishment is ironclad,
never to allow a box bearing the name of
the firm, to be taken out of the building
except with an article which has been sold
by them and for which they are responsible.”

Eventually, the color became so synonymous with Tiffany that the company trademarked it – along with the box, the bow, and the name, “Tiffany Blue Box®.” When they filmed “Breakfast at Tiffany's,” 40 armed guards were hired, not to protect the jewels so much as to ensure not a single box left the premises. They also filmed on a Sunday, which required Tiffany's to open on a special day just for filming.

Now, you may not need to go to these lengths for your own company, but if your brand is built on prestige, excellence, or luxury, these might be the minimum lengths you would go to position your brand in the marketplace. This is why it is so critical to get clear on who you are and what really matters to you in the first place. Perhaps, like Tiffany's, you don't want to work on Sunday. That's an important boundary to set in your business. Maybe you want to be seen as friendly and accessible – in which case, applying gold foil to your business cards might be a bit “over the top” for your brand.

It's your business. You get to decide. And decide you must - before someone else does.

This was an excerpt from my Raving Fans Toolkit, which is part of my forthcoming book "Creative Freedom". Be sure you're on my mailing list to get your free copy of the Toolkit as well as first notice when the book launches!

In the meantime, tell me your thoughts! What kind of a character are you crafting in your business? What are the "hallmarks" and signature moves of your brand? Share your ideas in the comments and let's be a rising tide for everyone.

"I am enjoying showing up as myself more completely." That was the nugget of gold I rendered from my weekend intensive with my coach this past weekend. Once a quarter I sojourn in Minnesota for a few days to do deeper work to heal my "stuff" and open up blocks around my mindset. Because I'm […]

As we roll into the content marketing episodes of this season of Creative Freedom, you're going to see that there are many different elements that help you create a strong online presence for your business. From your website’s design to your use of social media, your marketing strategy includes a variety of tactics and elements […]