I can't count the number of times I've heard that phrase in my life. It's usually preceded by "You can't do that!", or followed by "Why don't you try something else?"

I sometimes think that when God gave me the choice to be born, I told him to give me the absolute hardest path to success - just so I could prove to people it could be done.

Then again, I also used to dream of being a mermaid.

I have, however, always been a bit of an overachiever. I'm the kind of person that says "Oh yeah? WATCH me!" when someone says "you can't..." I've taken trips, been in programs, raised kids, and generally lived my life unconventionally.

It's only been recently that I've learned the art of quitting. I was always the person that flatly refused to give up. I worked a job where my paycheck bounced - twice -before I took the hint that I should probably move on. I've gotten better at seeing the signals that tell me it's time to move on. On the whole, though, I'm still a tenacious, relentless being. I don't quit just because something's hard.

"Impossible" and "really hard" are not the same thing.

In my years of experience, I've managed to see my way through a lot of "really hard" stuff. I experienced the joy of living on welfare, abuse, racism, and more - all before I graduated high school (with honors, thank you very much). I grew up in Flint, Michigan, the most dangerous city in America, for heaven's sake! I think that automatically earns me some kind of combat medal.

I left school and forged my own path. Then I got pregnant and did the single mom thing for a while. My 20's had their share of... well, me being in my 20's!

Then, I got married to a man who's had to deal with his own emotional baggage. I mothered my eldest through a lot of troubled times. My youngest was involved in his babysitter's conviction for child sexual misconduct. I built a company, closed it, and laid off my one employee. And that's just the last 10 years of my life!

Saying all this isn't about shock value. It's not even about bragging. Yeah, I've been through some tough stuff, but so have many other people I know and love.

This is really about staying power. Grit. Stick-to-it-iveness, and being willing to gut it out when things get really really HARD.

Because "impossible" isn't the same as "really hard."

Impossible, as originally defined, means "not able to occur, exist, or be done." If it's impossible, it's simply not possible.

But Napoleon Hill said "Anything the mind of man can conceive and believe, it can be achieved."

Now, good old Mr. Hill didn't say it would be easy. He just said it can be done. It's possible.

It's possible to fly, to plumb the depths of the sea, use touch fasteners to "tie" shoes, and chat with friends in other countries in real time. If you wanted to do any of those things 200 years ago, it would have seemed impossible. But the truth is, it would have been really REALLY hard... especially if you tried to do it all by yourself.

But someone eventually developed materials that made submarines and airplanes possible, "moving pictures" a reality, and velcro a staple in my kid's shoe closet. All the raw materials existed 200 years ago, but they hadn't been put together yet. It took a series of chemists starting in the late  1700's and early 1800's to figure out the polymers that would eventually give us Velcro in the 1950's.

It takes a village, yo.

When I was 21, and pregnant with my first son, I took a road trip to Colorado. In Wyoming, between Laramie and Cheyenne, there's a little town called Buford. The guy I was riding with suggested we stop and have a look at "Tree Rock".

This picture was taken that day (look at me being all prego!). Legend has it that this limber pine sprouted out of the rock before the railroad came through in the late 1860's. The Union Pacific line was actually diverted slightly so as not to disturb the rock. It was situated between the east and westbound tracks, if I remember the story correctly. Between the 1870's and 1901, before the tracks were relocated south, the trains would slow or stop and the engineers (or firemen, I forget which), would splash water on the rock to help nourish the tree.

100+ years later, I stood on that spot, marveling, as so many others have, at the sheer determination of that tree.

Limber pines are not uncommon in the area. Sherwood Mountain has them scattered all over.  Anything trying to grow out of a rock, though, is going to have a REALLY hard time surviving. It's a rock, for crying out loud! The only soil comes from whatever dirt and erosion managed to lodge itself in the crevices and cracks of the boulder. The tree is misshapen, twisted even, because of the harsh living conditions that a rock provides. Yet, in this picture, you'll see it's very much alive, reaching for the light, and maintaining an awkward yet bonsai-like grace that gives it an incredible character and strange beauty unique to that tree.

It's probably the most well-known and well-liked limber pine in the region. I'm sure more pictures are taken of that tree than any other for miles around. It is a local "celebrity" in some ways.

If you're like me, you see the tree and admire its tenacity. In fact, I posted on my Instagram page how it's a great reminder that "difficult" and "impossible" are not the same thing. I even said "If you're going through hard stuff, just remember to keep reaching for the light & let the people you trust nourish you. If this tree can make it through, so can you!"

And that, by itself would make a great story, a powerful lesson, and we could all go home happy.

But what about the rock? 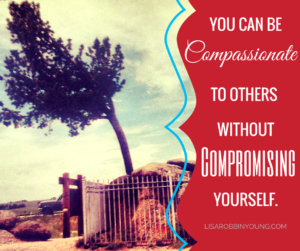 While limber pines are known to live for more than 2,000 years, this piece of Sherman pink granite is believed to be more than a BILLION years old. It's from the PreCambrian era, like most of the mountain rocks around it. It's also fairly commonplace in the region, like the pine, and remarkable in its own way.

It's got a tree growing out of it, for one thing. Not many other rocks around can make that claim. It was so impressive that the railway workers decided to move their tracks instead of blowing it up or trying to move it out of the way. After time, its fame was so widespread it ended up being gated off to keep people from chipping away pieces to take home for themselves. Like that limber pine, it's probably had more photos taken of it than any other piece of pink granite in the region - maybe even the world.

It could have easily fallen apart, crumbled, and "given in" to the tree years ago. If rocks could talk, it might have said "okay, you win, tree. This is all about you anyway." But it didn't. It showed determination to hold its shape and do what it came here to do: be a massive boulder! It also showed compassion for the life growing inside it, giving it enough room to do its own thing without compromising the integrity or purpose of the rock (you know, if rocks could demonstrate compassion. Everything is energy, right?).

My theme for the year is determination with compassion, and this seems a great illustration. Maybe it's a stretch, but as a mother, this is a powerful reminder to me that I don't need to give in or crumble with those that matter to me. I matter, too! I don't need to give up on me, my dreams, or what God put me here to do. I do, however need to be compassionate to the lives growing around me, and give them room to reach for the light, without compromising my integrity. You don't have to be a doormat or an ox. You can be determined and compassionate.

Another curiosity: if you look closely, you can see the rock is now an ecosystem. Mosses and other grasses have encroached and found a home at the base of this rock. Decades ago, this was a lonely rock with a twig growing out of its head, on the side of a lonesome, dusty road where people would stop for a photo, but not much else. Now, it's teeming with life, and the rock's got fans, and "family" of a sort in the people that take care of the roadside attraction.

If anything, you could call the tree and the rock ugly and commonplace, but together, they're remarkable. Without the rock, the tree would surely die. Without the tree, the rock is just another boulder on the side of the road.

Sometimes, when it's just you, it's REALLY HARD to see your beauty, your worth, or your value in the world. It's not impossible, just really really hard. With the right combination of elements, however, really hard becomes beautiful, remarkable, and talked about for hundreds of years. With the right people bringing those elements together, REALLY HARD can become incredibly easy.

So yes, keep reaching for the light, and let people nourish you, but also be compassionate to those growing around you without compromising who you are meant to be in this world.

You can be compassionate to others without compromising yourself. (tweet this)

Ever faced something you were told was impossible and make it through, or help someone else do it? What were your secrets? How did you manage? Share your stories, and thoughts in the comments below. Let's all learn from each other and inspire one another to grow higher!

by Erin Margolin [Editor's note: This is day 23 of the Be Your Own Guru series. Ever had a controversial project that you just KNEW would be amazing if you could get it in front of the right people? If you have ever wanted to rally a throng of people around your dream, if you've ever considered using […]

[Note: This is Day 17 in the Be Your Own Guru series. Today is also the re-launch of Dr. Eldon Taylor's book "I Believe: When What You Believe Matters". This post contains excerpts from his book. It's also an exploration of our brain's "efficiency trap" that keeps us mired in self-limiting beliefs.] Facebook Twitter Buffer […]