[Editor's note: This is the sixth in an annual series of posts I write to focus my efforts for the new year. You can find last year's post here.  Here are links to parts 1, 2, 3 and 4.]

Each year, I try to pick a word or phrase that reflects my focus, my "theme" for the year. Then, at the end of said year, I look back and evaluate, before rinsing and repeating for the new year. For 2013, that theme was "Inspire".

I launched the year with a goal to record 300 songs. I fell short. I'd say embarrassingly short, but I'm not embarrassed by the results:

I learned a LOT about what it really takes to make a quality recording in your home. More than I thought I needed to know, frankly. I learned how grossly out of my depth I am with the audio engineering process, and how it's a lot more art than science.

I think I'll stick to the art I'm good at, thanks.

Still, 50+ songs is nothing to sneeze at, and while we had some hiccups on the copyright issues with some of our broadcasters (I'm talking to you, SoundCloud!), I finally got my music heard by new fans all over the world... a bucket list item for almost 30 years.

I also met and began working with an uber gifted arranger, and we started working on the tracks that will be on my new album - my first recording in almost 10 years!

The biggest hurdle to finishing the recordings wasn't a lack of skill, it was a lack of time. The one thing you can't predict going into a new year is what new and unexpected surprises will benefit or befall you. This year was a doozie! We were right on course until April, when I was hit with horrible news about a close friend and my youngest son. That's when everything on the music front took a tailspin.

I launched several new programs including my Dream Big Breakthrough, Get Your Year In Gear and the Spotlight Sessions. Not all of them were big winners, but all of them reflected the growth and new direction that 2013 was leading me in. On the direct sales training front, I hosted a year-end livestream conference that doubled as my retirement party. It had a few hiccups, but overall, it was well received and a powerful event to help direct sellers move into 2014 with confidence and know-how to build their own noble empire and inspired life.

We also did a site redesign for the direct sales website as it moves to a publishing platform in 2014. Oh, and my brilliantly gifted designer created a new logo that will go along with this website's re-launch in 2014. Here's a preview.

You might remember the phoenix. We resurrected it from The Renaissance Mom - remember that? I thought it fitting, since my whole life has been about overcoming, rising up from the ashes, and whatnot. The laurel represents achievement, hitting the mark, and the rewards & accolades that come from doing more of your Great Work in the world. I'll tell you more about it in a future post, but recognize that this is a meme for me: owning my dreams and living them fully. THAT is what 2013 taught me and what the focus for 2014 is.

On the home front...

We had a harrowing spring, when a friend of the family was arrested on charges of child sexual abuse - and my youngest was part of all that. We've spent a good deal of the year in recovery mode with him, and he's making amazing progress. My teenager's drama led to more court dates, which revealed even MORE underlying issues that we as a family had no clue about. It was a hellacious year for my family, and I think we've pulled through the hardest part. There's still more court dates to come, but I know we're on the right track, and there don't appear to be anymore oncoming trains on the horizon. My oldest just turned 17, so one way or another that responsibility will not be mine for much longer. His life is truly in his own hands.

"When it all came crashing down in tiny pieces to the ground, I was all alone down here, trapped beneath the atmosphere..."

I lost (and lost touch with) a lot of friends through this rough patch. It really helps you get clarity on who's got your back when you're going through tough times. I'm grateful for those friends and family members who really came through in our dark hours this year, and hope I'll be in a place to return the favor at a later date. Those who've fallen by the wayside, while painful, remind me of the wisdom of Dr. Seuss: "Those who matter don't mind, and those who mind, don't matter." I respect their needs to honor their boundaries, and pray they do the same for me and mine.

In truth, things probably get stressful because I'm neglecting my self-care in the first place. Oh the irony!

But because of all that clarity, I made some big decisions relating to my professional life.

On the work front...

I rolled up the sidewalks on my direct sales coaching practice. For the last 8 years I've been a coach and trainer to the direct selling industry as a solopreneur. It's been fun helping people do their best work and live their dreams. It's also been hard, being on the outside of an industry that's more of an old boy's network than anyone cares to admit. Since I'm not a game player, I've really had to forge my own path - and that's a lonely way to work. Plus, it's not the work I was put on this planet to do. I've gotten good at it. I enjoy it, and I know that God has a different purpose for me. So, after two years of hemming and hawing, and much hand-wringing, I got me a job.

Yep. A w-2 filing, income tax-withholding "j.o.b." - I'm still more or less in the sales arena, but it's more in alignment with my ultimate objective - which isn't to have a job  for the rest of my life.

I'm still new here, and one of the youngest turks in the company, but nearly everything I'm doing is right in my wheelhouse. It gives me freedom to travel and, most importantly, allows me to have that financial stability (that I chased for 8 years as a coach) to pursue what God put me on this planet to do: write and perform. 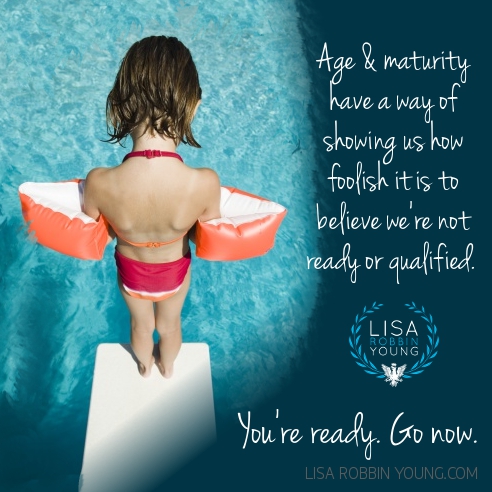 I've been a storyteller my whole life: stories about overcoming adversity, empowerment, and being more than your circumstances. Sometimes I write them (here on the blog, or in books like this one), sometimes I record them (like the 300 songs project), sometimes I perform them live (as an actor or singer). But it's always been about the stories. It took me a good portion of this year to realize that.

My whole life has been about believing in the possibilities of people. That's my Great Work: I believe in people. I inspire people to see the possibility in themselves. I believe in people when they don't believe in themselves. It's a great (and dangerous) gift to have as a coach - and part of why I think I got so good at it. I've always looked at how I can make something happen, instead of why it won't work. But ultimately, coaching isn't the platform I'm supposed to be using to do my great work.

See, just because you're good at something, doesn't mean that's what you're meant to do. It just means you've had a lot of practice at it, and maybe some aptitude. My aptitude, combined with 8 years of practice gave me a strong foundational skill-set... and created a comfort zone that was difficult to step out of.

"...and now everything is falling into place. A brand new life is calling and I owe it all to grace."

A LOT fell apart this year. Or should I say, it finished falling apart. We dissolved a business in 2012 and FINALLY was able to complete the bankruptcy proceedings this year. Which means, in MANY ways, 2014 is a clean slate.

I got to thinking during my annual planning process, that if it's really a clean slate, what do I want to write on it? How do I really want my life to look as I start down the barrel of turning 40 soon. I had goals and ambitions that I never got around to... until now that is.

There were a lot of nights (and mornings, and lunches) spent in prayer, meditation, & contemplation. I fought with God a LOT, and finally surrendered to a more difficult - and far more satisfying - path for my life. The words that kept coming up for me were "divine alignment" - stepping more fully into who I really am, who God called me to be in the world, and to do more of my Great Work on a global scale.

"You gave me something I want everyone to see."

Theme Song: "Learning To Be The Light"

A friend of mine turned me on to this tune by NewWorldSon (thanks, Deb!), and I've listened to it so many times that I think I've burned a groove into my CD. I believe in my core that we're all given at least one Undeniable Gift to put to use for good in this world. This song really speaks to the longing I have in my heart to explore and share my gift with the world.

"Oh God I just want to love on everyone. All I have is Yours to give so let the people come"

I know it's not a given that I can just step out onto a stage somewhere and start singing. There's work to be done. I laid some groundwork in 2013. I managed to get my book into the hands of more than 1100 people! I had at least one performance or speaking opportunity in every month of 2013. People got to hear my message - a message I'm still crafting an honing.

Gratefully, people are listening, and telling others, and joining the revolution. It's not just my journey - it's a journey we're all called to make: to own our dreams and share our gift with our world. That's what Divine Alignment is to me, and that's my focus for 2014. You'll hear more about it in coming posts, but for now, I'll let NewWorldSon say it:

2 Blasting back into the studio after a long hiatus, I've put together this swinging soul version of "Straight Up" by Elliot Wolff. It was a hit for Paula Abdul back in 1988 or so. This is a rehearsal video from the 300 songs project563. I love the empowering nature of the lyrics. Instead of […]

It never ceases to pique my curiosity. Like the Bat-signal, or a police chase, when searchlights pop up in the sky, my brain tries triangulating the light sources to see if I can figure out what's happening. I start to wonder... "What's so exciting?" "Should I know what that's about?" "Where exactly are those lights […]