As a small child, I knew I was called to be a performer. I remember being 2 or 3 years old (before we moved into the house I grew up in) and "performing" for my family. I'd stand up on my wooden toy box, pretending it was a stage, dancing and singing for whoever would give me the time of day. I remember the day I was too big to stand on that "stage" - my foot went right through the lid and broke the toy box.

Somehow, I've managed to totally mungle my dream because of shame.

I grew up in a community where the biggest dream most folks had was to get a good paying job in "the shop". GM practically owned Flint when I was growing up, and the parents of most of the kids I ran with were either in the shop, or served the shop workers as teachers, lawyers, or doctors. Our town was a shop economy.

The kids who didn't aspire to follow in their parent's footsteps were often looking for a major career in sports. Who can blame them? A lot of great athletes came out of Flint. So the big dreams of our community were either to work for the shop or go into sports.

Well, in case you've not seen a good full-length picture of me, I am not built to be a pro athlete.

I remember saying it countless times as a child. I remember sitting in my cousin's basement recording our own version of Bryan Adams' song "(Everything I Do) I Do It For You" on her boombox.  We'd make up our own radio programs (interviewing each other), and play our music "on the air". My cousin took music lessons, and she had skills. We even talked about forming our own band someday. For me it was practice for the future I just knew I was going to live.

But it didn't turn out that way.

See, in all that deliberate practice, there were these well-meaning voices from friends and family that I loved. People who were significant to me. People I would eventually sacrifice myself for.

My grandmother begged me (on her deathbed no less), to "stay close to home" when I went to college. I ended up forsaking a full ride to UC Berkeley and instead went to Bowling Green State University (Fighting Falcons!). My mother encouraged me to study music, but to go for an education degree so that I could teach as my "fallback plan".

None of that was what I wanted. I wanted to perform, sing, and get up on a stage. Not for the fame and fortune, but because I believed it was what I was meant to do in this world. I believed that God created me to  be a performer.

I was too ashamed to embrace my calling.

I'm a smart lady. I earned both the National Merit and National Achievement awards at high school. I was in the top 10% of my graduating class, voted most likely to succeed and all that. So it's not like I didn't have brains or anything. I'm not dumb as a stump. But I was too afraid to be different from everyone else I knew.

Most of my family were teachers or blue-collar workers. I was the blackest of the black sheep in that family from a career perspective. Hell, my dad didn't even finish high school, so to be the first of my family to go to college was kind of a big deal. An uncomfortably big deal.

So when people I trusted (aka, my family) told me to stay close to home, pick a safe degree, and have a fallback plan, I took their well-meaning advice. For a while. I felt embarrassed, ashamed even, for thinking that God would put a dream like that in my heart. Who am I to make an impact of that scale on the world?

Even when people would tell my I had a musical gift, I would thank them, and then brush them off. After all, I'm just a Midwestern girl from a poor, inner-city community. I don't have what it takes to succeed in such a difficult work environment.

After a while, I came to believe it.

I resisted it for a while. I even recorded a couple of albums, toured a bit, and tried to make a go of it as a local performer. Being a mom and a wife made it challenging to pursue music, and there was no support for that kind of "fanciful thinking" at the time. Which only further illustrated how "hard it is in the music industry".

So I tried to quit. I even tried selling my musical instruments and walking away from it completely. As if to say "well, I had a good run, now it's time to settle down and have a "regular life".

Dream shame continued to haunt me. I lived my quiet life of desperation all the while knowing that I was supposed to be doing something else - even though I had no real evidence to prove my case.

That knowing chased me in my dreams. It pushed me to take risks and do things I wouldn't otherwise have done. It found an outlet in one form or another - just enough to keep me from losing my mind, but not enough to fully realize my potential.

I thought there was something wrong with me. Why couldn't I just be happy where I was with what I was doing and the life I was living? We had a nice house, good kids, and a comfortable income, yet I was miserable.

I paid the price for years.

I still hear the nagging little voice reminding me that "this" wasn't what I was put on the planet for. I ended up bouncing around for nearly 20 years doing all kinds of things - including quitting school.  Eventually, I went back, but on my terms. If I was going to get a degree, it was going to be one I wanted, dammit!

My cousin has amazing musical skills, and eventually would grow up to be a great music teacher.  She's happy doing what she's doing and created a life for herself that suits her. At least that's what it looks like to me. And unless she tells me otherwise, that's what I'll believe.

But that wasn't the life I wanted. I didn't want to be a teacher. I didn't have the patience. I even tried teaching private lessons, and while I was good at it, it left me feeling empty and unfulfilled - like I was helping other people live their dream, but squashing my own in the process.

Finally, I unpacked that box.

For most of my adult life, I've done everything except pursue the dream that God placed in my heart. And at thirty-something years of age, I believed that my time had passed and that my dream couldn't be realized.

Then I wrote a book. And started recording music again. It was like picking up a bicycle after twenty years. And now, I don't want to stop pedaling.

Yes, I know that the recording industry is shifting, and I know that my lack of supermodel looks will not help me in my bid to win a Grammy.

Still, I know that this is what I'm supposed to be doing with my life. In addition to raising kids and being a wife, my God-given gift is to use my voice to inspire people. It's what I'm damn good at, and it's time I get back to it - before it really IS too late.

Just because everyone else around you doesn't dream on the same scale, doesn't mean your dream is wrong. 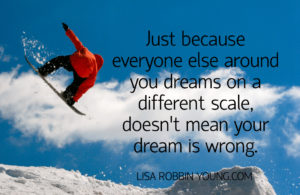 Jonah was given a directive, and he ran from it. Ultimately, his life was utter torment until he faced his calling and did what only he could do. Jesus was given a calling that even he prayed to be released from at one point. Many of us have a dream that's planted deep in our hears, it's taking root, and we're afraid to let the light shine so it can grow.

And it's not the dream itself that's the hard thing. It's the shame we face because having that dream makes us different than the people around us - people who matter to us.

There is no right or wrong size to the scale of your dream. All that matters is that you honor it to the best of your abilities. Not everyone has an Oprah-sized global-scale calling. Not everyone wants their world to revolve around their nuclear family. Neither is wrong. Neither is right. The only thing I can say for certain is this:

Choosing the "wrong" scale will ruin you.

By "wrong" I mean the scale that's wrong for you.

If everyone around you is telling you to dream smaller (or dream bigger, in some cases), just remember it's YOUR dream, not theirs. Maybe the reason you've been put in the midst of these folks to show them (and yourself) what's really possible. If it were easy, maybe it wouldn't mean as much to you. Who knows? I'm no shaman. All I know is that after nearly twenty years of turning my back on my calling, I'm clear that no matter how hard it gets (or how much harder it may become), I can't NOT do it anymore.

And those well-meaning people around me that want to see me healthy and happy may never understand that the best way for me to achieve health and happiness is to give myself completely over to my calling.

Whatever the scale of your dream, cling to it, live it full out, and don't let anyone stand in your way.

Even if it means dying for your calling (like Jesus did), even if it means eating ramen for a year while you save your pennies, even if it means giving up on the fallback plan so that you can pursue your dream. Do it, with all that's in you. Do it before you can't do it anymore.

We don't live in the world of our parents and grandparents, where a 9-5 is a stable thing. We have to be more resourceful and self-reliant than ever before, believe it or not. So if you're going to work that hard anyway, why not do it with something that means something to you? Whatever that is, do it, with all your heart. Be willing to pay the price first and THEN reap the benefits.

The road less traveled makes all the difference.

Facebook Twitter Buffer Pinterest LinkedIn So, um, I was listening to a Michael Buble CD, and as his swing rendition of Van Morrison's "Moondance" started playing, it became apparent that I could also hear strains of "Billie Jean" by Michael Jackson. It would not leave me. You know how you get a song stuck in […]

BEFORE WE BEGIN: I just want to let you know that my new web-based reality mini-series "30 Days To $5k" is now in full swing. Episode 1 aired Friday to an audience that praised the originality and risk-taking edge of the show. If you haven't yet seen the trailer for Episode 1, you can do that […]