BYOG Day 17 - Did An Authority Hijack Your Brain?

[Note: This is Day 17 in the Be Your Own Guru series. Today is also the re-launch of Dr. Eldon Taylor's book "I Believe: When What You Believe Matters". This post contains excerpts from his book. It's also an exploration of our brain's "efficiency trap" that keeps us mired in self-limiting beliefs.] 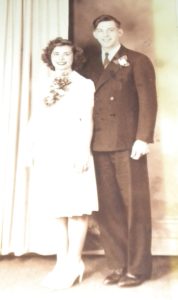 When I was a kid, I looked up to my grandmother.

Grandma was a looker as a young lass. She even sang in a local nightclub with her sister. The story goes that one night, when her boyfriend couldn't come to pick her up from work at the club, he sent his brother to bring her home. That "brother" went on to be my grandfather. That's their wedding picture on the left.

Even though she was "old" by kid standards, Grandma was cool and refined. She knew how to put on makeup and wear a dress (something my mom NEVER did), after a day of working in the yard, getting her hands dirty... and it always looked effortless and matter-of-fact with Grandma.

Okay, I still aspire to that level of effortlessness when it comes to "cleaning up." It always feels so arduous to me.

Grandma never had a driver's license, never learned how to drive a car, and somehow it never seemed like she needed to. People drove her everywhere she needed to go. She was a minor celebrity in my world.

Grandma turned me on to Hee Haw, Patti Page, and M*A*S*H* - as well as the virtues of cinnamon toast and/or orange marmalade on rainy days and Saturday mornings. She instilled a love of music in all her kids as well as her grandchildren. Some of us even had the gift. It wasn't uncommon for our families to gather at any given holiday and bust into one song or another. Whether it was the family's "Moon Medley" - a collection of tunes with "moon" prominent in the title or lyrics - or holiday carols, you could bet that if the Potter clan got together, music would be made.

Grandma's word was gospel to me. She was my first Guru.

That's where everything began and fell apart. I didn't know, until just recently, how putting all my trust in Grandma was actually doing me a disservice in the pursuit of my divine purpose. While reading Dr. Eldon Taylor's book, I came to a chapter about the mind/body connection. At first it felt very familiar...

"What we believe directly affects our health, and not just as a result of some peripheral matter, such as ignoring the warnings about smoking and choosing to believe in the law of psychological exception - that is, 'It couldn't happen to me.' No, studies repeatedly show that the mind has the power not only to immunize us against disease but also to create illness."  - Dr. Eldon Taylor, "I Believe: When What We Believe Matters"

But then, he got specific about how we process information from authority figures. He said, in essence that our brain tries to be more efficient by immediately accepting as truth the words that come from the lips of whomever we consider an authority in our lives. Dr. Taylor's book goes on to quote the findings of a 2010 study which reports that parts of the brain that function to help us judge what is true, and the level of importance to place on what someone says actually shut down "in the presence of an authority".

This is an "efficiency trap" of the brain.

Then I read something that sent me reeling back to the day my dad died. When his doctor told him he had cancer, he was dead less than a day later - because he grew up with in a time where the prevailing belief was that cancer was a death sentence. Here's what I read:

"First, every single patient who believed that the mind had a role in wellness, and whose physician believed this as well, was in complete remission (no evidence of cancer). By contrast, every single individual whose doctor reported that the mind had no role in wellness was dead. In a sense, it didn't matter what the patient thought within this latter group - it all depended upon the medical authority." - Dr. Eldon Taylor

When we ascribe "authority status" to an individual, we are basically handing the keys to the hijacker and letting them have their way. I won't get political about this. It happens in every corner of our lives - and sometimes it's an empowering thing. We need our health care practitioners to know their stuff, and we shouldn't be spending all our time with them second-guessing their diagnoses. That holds true in all our areas of life and work - you need to know you can trust your trusted advisors. You need some level of confidence that they know their stuff.

That doesn't mean that everything that escapes their lips is pure gospel, and the minute we give them that authority over our lives, we've stopped thinking for ourselves (or at least made it a LOT harder to think for ourselves).

That's what happened for me when my well-intentioned grandmother asked me - on her deathbed no less - to stay close to home for college. I trusted that she had my best interests at heart. She gave me good "reasons" why staying close to home was a good idea. It wasn't until much later that I realized that staying close to home actually hindered my path and set me down another road altogether.

Now, lest you think I totally regret this journey, I also acknowledge that I wouldn't be who I am today, wouldn't have my kids, my husband, or the friends that I have right now if I hadn't made this decision. And ultimately I made the decision, not Grandma.

So there's a double-edged sword here. When you call someone your guru, when you give them "authority" status in your life, you've given that person a lot of sway over you. But it's just that: sway. The final decision still rests in your hands, and you have every right to seek a second opinion (or third or fourth). You have every right to say "no thanks" to that authority - even if they are well meaning.

You also get to live with the consequences of that choice.

"If we assume that the environment combines with our hardwiring to deliver our choices and options, it's easy to see that finding the authentic self and nurturing it is much more difficult than adopting the false self so easily imitated from the world we inhabit. In our culture... how do we preserve our true being?" - Dr. Eldon Taylor

Yep, it's hard to go against your authority figures. That's both an efficiency and a protective mechanism of the brain. The brain assumes that people you've put your trust in are there to help you. Even if you don't believe in unconditional love/trust, your brain seems to. That's not always a bad thing, and it's not always a good thing. The beauty of being a human being is that we have choice. We can choose in any given moment to go with or against the grain. Sometimes, doing the hard thing is what's called for. Being your own guru means that, ultimately, YOU are your highest authority on earth, and what you say goes. Elanor Roosevelt said that you have to consent to let someone make you feel inferior. YOU get to choose. It begins by where you put your trust, and who you consider an authority. Do not bestow that honor lightly. When you turn the keys over to another human being, they have a lot more sway over the rest of your life.

[Final note: I'm still reading (and re-reading) Dr. Taylor's book. If you're interested in digging deeper into his findings, you can learn more about his book (and get free bonus gifts when you buy) here.]

Do you really need a "blueprint" to be successful? Advice from daVinci and Edison
Lisa Young

Catch the previous posts here: Day 1 | Day 2 | Day 3 | Day 4 Welcome to Day 5 of the Creative Freedom Challenge! Today's topic is dangerous, and muy importante. As a coach and trainer myself, it's a bit sacrilegious for me to suggest that spending mucho dinero on some guru's "blueprint" or […]

She was sprawled out on the sidewalk, screaming bloody murder.  The bike - a garage sale special (meaning there was no padding on the all-metal seat) - was still somehow attached to her. She and I lived close to each other, and were about the same age, but I had no real interest in bikes when I […]