This used to be a difficult question to answer. When we talk about the Five Tenets of a Noble Empire, we know that it takes a community to build an empire. We know that it is built on service, not servitude, and that we need connections to make that happen. But HOW do we get there? Other than letting nature run its course, which admittedly takes time, could there be a faster way to build your noble empire?

According to Sarah Robinson, there is.

Sarah is the author of Fierce Loyalty: Unlocking the DNA of Wildly Successful Communities. Her premise is that there is a sort of "DNA" that is encoded in any noble empire. According to Sarah, there are ﬁve building blocks that come together to form the DNA of Fierce Loyalty:

The first two building blocks form a foundation, and without them, a community can't even exist. But the final three are the core components of Fierce Loyalty. A community can exists without them, but when all three are present, Sarah says that's when "followers develop into a powerful community movement supporting your mission, services, or products." 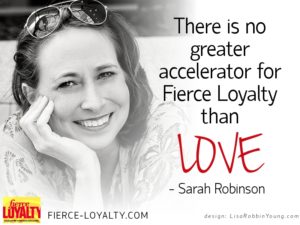 At just under 100 pages, Sarah's book is concise, yet incredibly full of useful information. There are plenty of case studies for the detail oriented, and enough bite-sized action items to take your empire building activities out of the theoretical and into the practical.

My favorite part of the whole book has to be the 11 Fierce Loyalty Accelerators - none of which is complicated to implement. The best one is also the easiest by far for builders of a noble empire:  Love Your Community. Sarah herself says "There is no greater accelerator for Fierce Loyalty than love."

One may think that because Sarah was at one time my coach, I have some sort of fidelity or loyalty to her, and I have to post a glowing review of her book.

Not true. In fact, I was sort of leery to volunteer to be one of the advanced readers as part of her book launch Street Team. What if this book totally missed the mark?

Fierce Loyalty is the one thing Sarah DIDN'T teach me while I was coaching with her, and I wish that she had. Like so many creative entrepreneurs, Sarah went through a lot of thrashing before she coalesced these ideas into what I think is truly her genius work - her Magnum Opus, if you will. Sarah's always been great at building communities, but it's only been this past year, as she honed the message of Fierce Loyalty, that she was able to communicate that genius in an approachable way. So as a coaching client, I wasn't taught any of this stuff - at least, not in the straightforward way Sarah presents it in her book.

That's pretty typical in the evolution of a creative entrepreneur. We sometimes can't see the forest for the trees. Sarah admits publicly that while she had this gift of building communities, it took someone else to identify that talent publicly (watch the video here). I was so taken by her transparency, that I've asked Sarah (and she agreed) to sit with me in the coming weeks so we can talk more about this evolution, her new book, and get a behind-the-scenes glimpse of how she launched Fierce Loyalty so successfully.

So yes, I enthusiastically give this book a big thumbs up. It's not fluffy. It's an easy, accessible read to help any organization quickly build their noble empire in fun, profitable ways. I'm even planning to launch my own Fierce Loyalty journey so that you can see Sarah's model in action (more details to come).

Plus, Sarah's donating a portion of the proceeds from the book to a courageous charity. That's creative entrepreneurialism at it's world-changing best, right there.

Still not convinced after reading all the reviews about Sarah's book? Well, grab your own sneak peek excerpt and maybe that will help you decide. Frankly, if building a noble empire is on your to-do list, you can't afford to be without Sarah's book. It's incredibly affordable for all the value she provides (the intro price for the Kindle version is less than $3, paperback is less than $13).

What Happened In Vegas...
Lisa Young

It was a business trip. 8 days in sunny Vegas, while my family was snowbound, just HAD to have some kind of a story, right? SPOILER: this one begins with guilt, shame, and resentment, and ends up with me feeling like a princess, and six lessons you can use in the pursuit of your dreams. […]

Read More
When Your True Voice Is Silenced
Lisa Young

We are truly blessed. I'm was in the Nashville area this summer, enjoying a family vacation, and the weather is wonderful. The hotel, not so much, but hey, I'm not complaining. Seriously, when you can travel 600 miles from home and visit friends, recording studios, make new friends, and generally enjoy yourself, doing what YOU […]