Admitting Who You Really Are, Part One

I'm learning that many of my best posts come out of a convergence of three moments in my life. This post is no different.

The first is a piece of my long lost past.

When I was a kid, the mother of a very good friend (who nearly committed suicide after his dad died), told me a story - about crawdads in a bucket. They just keep pulling each other back down. If there's only one in the bucket, it's really easy to escape, but when you add just a couple, they sabotage each other's success, in an effort to keep everyone at the same level of "existence."

The lesson I walked away with was the idea that it only takes one or two insidious crawdads to really impede your rise to the top. You have to be very careful about who you let into your bucket.

The second was a brilliant, poignant post by my former coach @elizabethpw, wherein she owns up to who she is, and who she isn't. 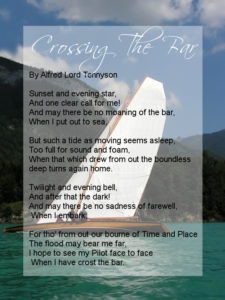 Then today, I was given a piece of music to sing at a funeral tomorrow by a mutual friend. Crossing The Bar is a poem by Tennyson that was set to music in 1903 by an English composer named Parry. The lyric so moved Tennyson, that he requested it always be placed as the last work in any collection of his writings.

When you know who you are, you aren't afraid to admit who you are not. You stand confidently on your ship, facing the tides, and sailing on as you must. You don't let anything - including insidious crawdads - pull you back from your rightful place on that ship.

The other day, God stirred this visual inside me. I shared it when I was a panelist recently at the Global Women's Summit in my hometown, and feel compelled to share it with you.

Imagine you are sitting around a table at lunch, enjoying the company of your friends, when suddenly, a person at the table next to you starts choking.

They're turning blue, and time is of the essence here.

Imagine also, that you know CPR. You're trained in the life-saving technique, but no one else at the table knows you have that skill.

Are you going to sit there and let that blue-faced diner collapse and die? I mean, what would your friends think if they knew that YOU, of all people, knew CPR? Gosh, then they might think you were trying to be all special or better than them or something. Right?

Or are you going to put your fear of criticism aside, step in, and administer that life-saving, undeinable gift you've been given?

Your undeniable gift may not be CPR, but your gift can save the world.

Use it. Admit to who you really are (and who you are not) and share your undeniable gifts with the world.

My friend was widowed at 40, died at 48, and left behind a 16 year old son. You don't know how much time you'll have on this planet to share your gifts. What in the name of all things holy are you waiting for?

From Michael Buble to Midian to Macklemore: Artists Reclaim Their Art
Lisa Young

Shocking, but true: back in 1994, an unknown, unsigned artist had a number one hit. Lisa Loeb's "Stay (I Missed You)" became the spring board for an enduring career for the bespectacled artist - one that took a more traditional turn when she signed with Geffen Records. Back then, it was almost unthinkable for a […]

[Note: I originally wrote this post a few years ago, for my Business Action Hero website. I've refreshed it here because it's still relevant - maybe now more than ever.] "If you are deliberately trying to create a future that feels safe, you will willfully ignore the future that is likely.” - Seth Godin Facebook Twitter […]