Every Hero Needs A Theme Song - Part One

[Editor's note: this is a re-post from November 2010. Part of a series of year-end posts I write each year. When we migrated to the new site design, all the old posts were archived.]

Rocky had "The Eye of the Tiger"

Indiana Jones was lucky enough to have John Williams write his anthem.

My composition skills are a little rusty, and frankly, I was too busy this year to compose my own anthem. Maybe next year.

With just under 45 days on my boat trip to the shores of adventure (where I'll burn my ship), I'm starting to feel queasy. To distract myself from scuttling the journey all together, I'm considering what my anthem will be for 2011.

In October last year, I had my first-ever annual planning session for my business (yeah, I know. That's another topic for another day). At that session, I picked one word to define what 2010 would be all about.

That was my goal, my single-minded objective. I wanted to build a life (and a business) that reflected that word. I made an inspiring little video, and trimmed my sails for the "uncommon" adventure.

"What if there's something bigger for me out there
Than the comfort of a life on this middle ground?
I've played it safe but now I can't help but wonder
If maybe I've been missing out,
Cause I look around and see a sea of people.
Everybody's moving in the same direction,
And I think it's time for me to break away..."

Careful what you wish for.

When I returned from that planning retreat, my world was literally up-ended as problems with my oldest son escalated. His anger and violence degraded into petty theft, property destruction and more than one visit from the neighborhood police. To stop things before he ended up in jail (or worse), we enrolled him in a wilderness camp for emotionally troubled boys. It was about this time last year we took him off all his medications and one month later, placed his day-to day care in the incredibly capable hands of some compassionate men in Ohio.

In a day, he'll come home for his longest "visit" yet. Home visits are usually a couple of days, and "test the waters" to determine if a child's ready to re-enter the family setting. The holidays bring him home twice in roughly a 4 week period. In the next month, he'll be home
for nearly two weeks.

Scared it's going to be horrible, terrible, and the worst holiday ever.

I'm scared that it's going to be incredible. Wonderful, fantastic, amazing, happy and the best holiday ever - and then he'll return to camp for another winter.

All year, he's been splitting wood, sleeping on a plywood "bed" outdoors, building tents, learning about the big, wild, outdoors, and working on some incredibly challenging goals.

Yeah, I write letters, and send him "stuff" and tell him I love him. But it's hard. Damn hard. I know grown ups that can't achieve some of the goals he's set for himself - like learning to have a good attitude even when things don't go his way.

This will be the first year I won't celebrate his birthday with him. He'll be 14, and I won't be there.

"What if the right thing was harder than the wrong thing
But I did it anyway?
Standing strong even when no one else was watching.
What if I really lived that way?"

When I was a kid, I couldn't fathom a parent that would "give up" their kids, send them away, or just let go and not be a part of their child's life. To me, it seemed like the ultimate admission of defeat, tantamount to being a bad parent that couldn't care less about their kid.

Then, I became one of those moms.

"What if I made it to the end of my days here
only to find that my legacy was nowhere to be found?
I don't want to waste another second.
Give me the strength to start right now."

I rearranged everything in my life to accommodate the 6 hour drive (one way) to Ohio every other weekend. The parent meetings, reviews, pick-ups, drop-offs, and every chance there was to catch even a glimpse of my kid on the few hours this year I was able to spend with him.

It's still hard. I'm learning things I never knew about my kid, my spouse, myself. I recognize I wasn't the best mom for my kid - and I did the best I could with what I had and what I knew. Now that I know better, I'm trying to do better, to be better, to love better.

"I don't care if it makes me look different.
I'm never letting go of my convictions.
Let the world see the life I'm living and call it Uncommon.
I'm done with the easy way out."

In a previous post, I discovered my super power, and made the realization that I do things the hard way - but harder's not always better. "Harder" is what you do out of necessity. "Harder" is why faith was birthed in us: nurtured by some, shunned by others.

I don't like "harder" any more than the next guy, really. I'd much prefer a little "easier" for a while. It appears, however, when you're on that boat to your next big adventure, that the waters may be pretty choppy. Remember to pack the Dramamine and keep rolling.

"I want to finally take the road less traveled.
I want to run away from anything typical.
I want the world to see the life I'm living and call it Uncommon."

As I stare down the barrel of the next 35 years of my life, I recognize that the bar I set, the "wish" I make, the goal I set may be hard, but it's  far easier than sitting still and doing nothing.

"Every heart has it's defining moment.
This is mine and I'm not going to miss it"

I've made a short list, realizing that whatever anthem I select really will shape and color what next year will look like.

Something to live up to.

Something to make the greatest impact in my life in all the right ways.

Something to think about. 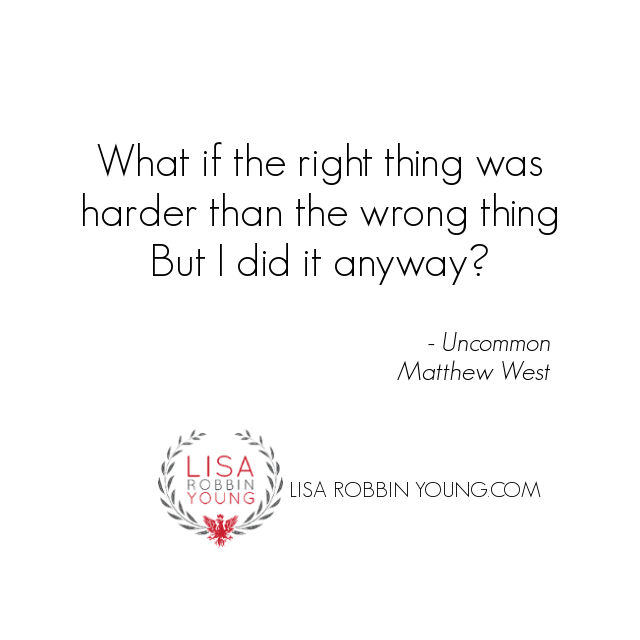 Hoo-rah! We're FINALLY back! Season 4 is underway, and we've got a slew of great episodes lined up. We kick off the season with a look at the 6-Figure deception, what it is, including real-life examples. I also talk about the differences between the 6-Figure Illusion and the 6-Figure Distinction, so you can understand how […]

This is the first part of an hour-long interview with Author and Martha Beck-trained life coach, Sarah Robinson (here's part two). Her book, "Fierce Loyalty: Unlocking the DNA of Wildly Successful Communities" is available in paperback or Kindle format on amazon. You can read my thoughts on her book in this previous post. In this episode, Sarah […]