What Is A Noble Empire?

A Noble Empire is, at the core, a transformational business or organization that seeks to serve and is highly rewarded (and highly regarded) for that service.

In our world today, empires are scorned, disdained, and generally maligned, because they are seen as greedy, despicable enterprises or political machines plotting to take over the world and leave us "Regular Joes" in utter despair.

In my heart, I believe it's possible to build something grand. Something focused on serving the masses, instead of severing them. An enterprise that benefits not only the founder, but all who connect to it. It's a "symbiotic" existence and yep, it might be a little Pollyanna of me to think it exists, but I believe in it all the same.

I call it The Noble Empire.

Five Tenets of The Noble Empire

1. The Noble Empire is founded on a higher calling. I'm not necessarily talking about God here, although that's as good a calling as any. For me, I believe that each and every one of us was put on this planet with a gift. Our life's work is to share that gift, whatever it is, with the people that most need it. We are all emmisaries, missionaries, and messiahs in that respect. Like Jesus, we are not even to let the threat of DEATH stop us from pursuing that calling. I suppose some might call that lunacy. So be it. There is no one else on the planet more qualified to share your unique gift with the world than YOU. If you don't share it, who the heck will?

2. The Noble Empire is a holistic one. There's a balance between work and play - and it doesn't look like the scales of justice. It looks more like spinning plates on a tightrope. I've talked about what I call the Five Key Areas of Success before (Family, Fitness, Fortune, Freedom, and Faith), and I go into great detail on each of them in The PEACE System. You can literally and figuratively die in one or more of these areas if you neglect them for too long.

3. The Noble Empire is built by many, not by one person. It's built by an army, un-leaders, trailblazers, a rag-tag bunch of believers and, above all, what I call Overcomers. It takes time, dedication and commitment to build the kind of fierce loyalty that teems inside these folks. And the payoff is incredible. They'll take a bullet for you. . . well, maybe not a bullet, but they'll defend you from trolls, spread the word, and stand in line to buy what you're offering.

4.  The Noble Empire is about service, not servitude. There's a BIG difference between service and servitude. No one is a slave to The Noble Empire - including we emperors. There's a sense of mutual reciprocity, a "rising tides lifts all ships" kind of energy that is pervasive throughout the empire. Respect, mutual admiration, and a willingness to collaborate and learn are high on the list of values.

5. The Noble Empire is about connections. Face it, no one can really get anywhere on their own for long. Someone somewhere has to collaborate, connect, or otherwise contrive to make something happen. Humans are not meant to be independent, nor are we meant to be co-dependent. We are INTERDEPENDENT beings. Sometimes we do stuff by ourselves, but on the whole, we need each other at various points along the journey. That's as it should be, so why try to pretend otherwise?

With so many people building walls and cloistering themselves, my experience has shown that reaching out is really the best way to build strong ties (and thus, a strong empire). Empires need allies, after all.

Here's to building Noble Empires from here on out - if empire building is your thing.

Watch The Manifesto of A Noble Empire 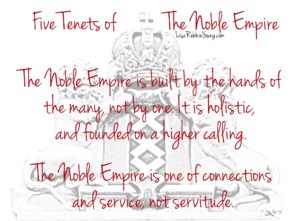 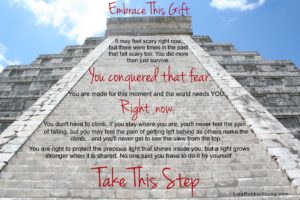 [Editor's note: This is the sixth in an annual series of posts I write to focus my efforts for the new year. You can find last year's post here.  Here are links to parts 1, 2, 3 and 4.] Inspire. Brave. ENTHUSIASM! Uncommon. Each year, I try to pick a word or phrase that reflects my focus, my "theme" for the year. […]